Layout and Design by Tom Gulotta, Patton Brothers, San Diego, CA
Photography by Larry Frowick, Scott Lockwood and other folks whose names we've sadly forgotten
Original Concert Flyer Illustrated by Rick Griffin
Thanks to: David Neal, Chris Gibson for the Flyer, Neal Williams, Gene, Doug, and all you who remeber this era and have stuck around for the ride - we love you! 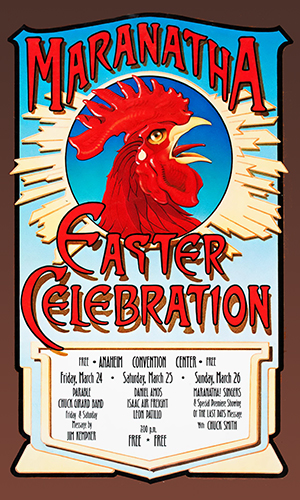 Notes from the UnderHound (of Heaven)

Behold a wizened, 6th-century Italian monk, while perusing the ancient Mediterranean archives in search of odd religious artifacts and brik-a-brak, has made a monumental discovery that is certain to rock all of Christendom.

The monk is actually a friend of mine and collegue Tom Gulotta and the ancient archives are the top shelves of Ed's garage. Tom has managed to uncover yet another live Daniel Amos concert, circa 1978, captured for posterity on age-weary, 16-track mylar. We at STUNT have scraped most of the cobwebs and barnacles off and are now releasing it to the world, though not without a certain degree of reluctance.

On first listening, I was struck by two key elements - the band's professionalism (Vocals tight, tempos locked - adter all, we were a 'working' band) and our musical paranoid schizophrenia. This, as it turns out, was a Clavary Chapel event (dubbed the "Maranatha Easter Celebration", a three day concert with many other Calvary Chapel bands) and we were just beginning to tentatively launch into the murky, uncharted waters of Horrendous Disc. I can hear myself taking great pains to tip-toe the audience through the minefields of new musical exploration. Even then we were concious of the need to untangle ourselves from the safety net of Shotgun Angel and the heady accolades that were the perks of being the "darlings of Calvary Chapel" and the "golden boys of CCM". It was time to carefully venture out into a kind of transitional twilight, fraught with unknown dangers and uncertainty. If we were to survive as a real band (and avoid part-time jobs in the Maranatha warehouse), this was an unsettling yet necessary "letting go".

As a result, if one is looking for an accurate depiction of DA's artistic mindset at the time, these recordings are somewhat misleading. Their value, it seems to me, is in their being a kind of period piece, capturing the first birth pangs of a controversial career that would eventually span some twenty-odd years.

Does the 5,000-plus audience sense that we are self-conciously dangling our feet on both sides of the artistic fence? You be the judge. As for me, I can hear (perhaps "sense" is a better work) the crowd's waning enthusiasm during the "Preachers from Outer Space" segment, as opposed to the heightened response when the band is in familiar territory. "Happily Married Man" and "Abidin'" (both with lyrical, moral one-upmanship blatantly intact) rip the roof off the joint, while "Secret Scripts" receives polite, almost sacrificial applause. In retrospect, the juxtaposition of musical styles (for the sake of becoming "all things to all men") is uncomfortable and somewhat disappointing to the artist in me, as it was then to a lesser degree. My musical missionary hat, along with the slide whistles, zany props and cowboy boots have also been stashed away in Ed's garage. You'll find them in a barrell that some in the church have labeled "the good old days when the band wasn't ashamed of Jesus".

still, all in all, there are some very good moments here, along with a few repertorial surprises. The timelessness of the country arrangements seem to me to hold up a little better than the occasional "new wave" meandering. "Hound of Heaven" and "Horrendous Disc" sound fine. The concert's musical package, coupled with it's historical significance historical with a small 'h' and significance with an even smaller 'S') is, at the very least, curio worthy of it's present incarnation. We hope the fans agree.

There are some sonic "scars" here and there that the listener may pick up. This due to tape age, but we have made every effort to minimize it - including baking the tapes like two thick, 15-inch pizzas in a gas oven according to Doug's secret recipe (no joke!). The tapes were so warped that there were times during the mix when Tom had to press his fingers against the heads. We unfortunately had to cut the Anaheim version of "Mary Baker Eddy" after mastering due to irreversable damage. We decided to add the Oil City cuts (from a '79 show in PA) at the last minute to keep the theme intact. That's Alex MacDougall joining Ed on "double" drums. Special thanks goes out to Doug for the Digital wizardry and G. Eugene for his mixing expertise.

I might add that it's a pleasure for me to hear my good friends Mark Cook and Marty Dieckmeyer "chopping" again. And that's Dom Franco (Ed McTaggart's old friend from the group Bethlehem) playing to steel guitar.

The bonus stuff is taken from a really bad cassette copy of some "I once was lost, but now I'm found", four-track recordings from late '78 at the old Rebel Base rehearsal studio. Included is, among several unreleased tunes, a band and audience "live" favorite at that time, our cover of the Beach Boys' calssic "I Get Around", with a great Jerry Chamberlain arrangement. That's Mark Cook singing his tune called "You Always Run Away From Love". Again, these are hardy pristine recordings, but enjoyable nonetheless. That's Alex MacDougall again on "double" drums, as we were well into our Horrendous Disc period when it was recorded.


So enjoy kids, and if you find that you have an appetite for more of this type of thing, drop me a line (it seems there is an abundance of DA's tattered and torn underwear waiting to be paraded down the dark corridors of our infamous past). Then again, if you want the madness to stop, you'll have to petition the mad monk himself, Tom G., in care of Ed's garage, third shelf on the right.